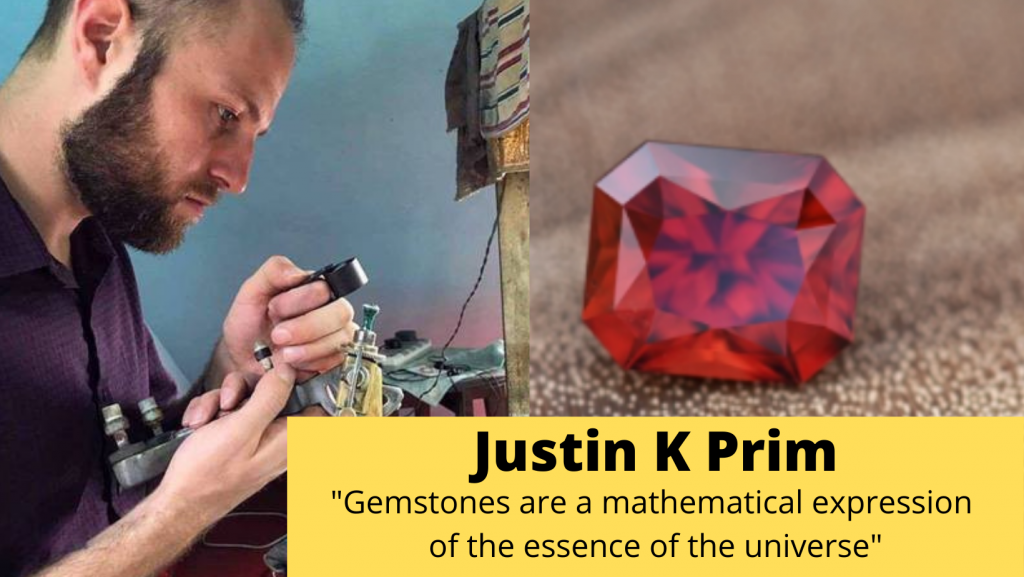 ‘Whether I’m writing an article, teaching a new student, travelling to a city to discuss gem cutting with a gem cutter, researching a specific stone or cut stone design or just cutting a stone, I constantly research and analyse the art of gem cutting, past and present. The craft of gem cutting continually fascinates me, so exploring it in this multi-disciplinary manner is extremely rewarding for my work.’ (Justin Prim)

A gem cutter, historian in the field of gem cutting, writer, lecturer – that’s Justin K Prim. The world of gems fascinated Justin so much that since 2013 he decided to focus only on cutting gems, buying, selling and designing jewellery. He has gained worldwide experience and knowledge all over the world and today he passes on his knowledge.

Justin Prim studied gemmology at the GIA in London and Bangkok as well as the AIGS (Asian Institute of Gemmological Sciences) in Bangkok. He also worked at AIGS, where he led courses and taught gemmology. He helped open the Institute of Gem Trading in Bangkok where he taught a two-week gem-cutting course. Recently, he has just launched a new website, FacetingApprentice.com where he teaches gem-cutting through online video courses. Aside from this, he also creates videos, writes, and publishes articles, and earlier this year (October 2021) he published the book ‘The Secret Teachings of Gemcutting’.

The secret of gem cutting revealed

If you are interested in how a shapeless piece of rough gemstone becomes a beautiful and shiny gem, you should read JK Prim’s book. The book, aptly titled The Secret Teachings of Gemcutting, takes you through centuries of gem cutting. The book sold-out in advance, so if you didn’t manage to buy one, you have to wait for the next edition. It contains a collection of 50 classic cut gem designs that have ruled the world of gems for 500 years. In addition to colour photographs, there is also information about the design, advice on cutting individual cuts and also something from the history of cutting.

The collection of classic gemstone cut patterns consists of industry-standard gemstone patterns that have been tried and tested over the years and you will commonly encounter them in jewellery. Gem cutters will also find valuable information in the book: gem design, diagram recreating, optics, physics, matching rough gemstones with designs and much more information affecting the resulting gem.

‘Most of my inspiration comes from history. I love exploring the history of decorating and manipulating precious stones, dating back 40,000 years. Gem cutting is older than farming; you can look at human society at any point in history and you will find a gem cutter there … I like to look at the early faceted designs that were used by gem cutters back then because many of them have been forgotten. You can acquire a great deal of inspiration from looking at old gems and old jewellery. I like to spend hours in museums looking at old paintings showing gems, jewellery, fashion styles and the overall look of 15th century people.’ (Justin K Prim)

And as the past is rich in gem trading and processing, Justin K Prim plans to publish more books in the coming years. These books will focus on the history of gem cutting in America, Europe, Asia and India.

Justin K Prim has been working with gems since 2013. He learned to cut and polish them, but this knowledge was not enough for him. He knew nothing about gems so he decided to study gemmology in Bangkok. Therefore, he obtained comprehensive knowledge of gems. He not only knows how to get a glittering gem from a rough gemstone, but he also recognises them from within.

‘Gemstones are a mathematical expression of the essence of the universe. If we could look close enough to see the crystal structure of a gem, we would see patterns decorated like a Buddhist mandala or Islamic tile mosaics. The way in which these physical elements are organised into different crystal shapes is incredible and the fact that the crystal lattice can absorb other elements determining the gem’s colour is even more incredible.’ (Justin K Prim)

The universe in a gem

While most of us are captivated by the shape, size and especially the lustre of a gem, Justin K Prim went deeper. It is light reflection that gives each gem a unique sparkle and shine. He mastered the laws of light movement inside a gem, which is why his pieces are unique.

Many of the strangest mysteries in the universe are present in a gem, although they are often difficult to understand. The deeper you go, the more you can discover. I have found that the same is true regarding gem cutting. Cutting generally deals with light and how the cutting design and patterns move the light inside the stone. Light movement directly affects how we perceive colour: matt, shiny, dark, bright, etc. The more you know about light movement inside a stone, the more you feel like a scientist working on the edge of our understanding of reality.’ (Justin K Prim)

Justin applies his knowledge to cutting gems. He knows how to work with a gem to get the best out of it. He uses a combination of gem cutting knowledge and physical laws.

Despite the pandemic, Justin K Prim has not given up his course and continues to teach remotely. The gem cutting course was moved to the online world. He also organises webinars and publishes educational videos on YouTube. The initial interest in gems and their processing became full-time work.

‘Gem faceting was once a huge industry in Europe, and also in major US cities such as New York and Los Angeles, but today it is almost non-existent. The main source of my motivation is to try to relight the fire, and encourage new generations of people to become gem cutters. So far, my efforts have been relatively weak: inspirational videos, discussions and cutting lessons in small groups. I would like to take this work to another level by working with schools and local authorities to offer incentives to help relaunch the gem trade.’ (Justin K Prim)

The effort of JK Prim leads to the rebirth of an ancient handicraft, to gem cutting. He managed to place the work of gem cutters into people’s awareness. In his videos, he explains how to cut gems, you can see how a rough gem becomes a shiny gemstone or watch seminars with gem cutters from around the world. The videos include a series of videos with tips and tricks for both advanced gem cutters and beginners.

If you want to look into the gem cutting secrets, their smallest structures and understand the stone as such, you can watch videos or sign-up for a course. We managed to reveal a bit of the secret of some gems. JK Prim told us and explained one of the mysteries that makes them irresistible, attractive and magical.

‘Ruby, sapphire and emerald have several colours inside them that mix to create the colour we see. However, this mixture is not static. When we tilt and turn the emerald in our hands, we see two different shades of green (perhaps a yellowy-green and blue-green), which dance together and form a third colour which is constantly changing, and is elusive. The colour changes depending on how we look at the stone and what environment we are in. This makes the stone mysterious and elusive, which I think attracts us even more to these precious stones.’ (Justin K Prim)

‘Jewels are one of those rare items that allow us to transcend worldly experiences and elevate us to something higher. Jewellery can be simple, decorated, magical, enchanting, big, small, elaborated, of any kind.’ (Justin K Prim)

Although Justin K Prim generally focuses on gemstones, you will also find custom-made jewellery on his website. Gold or silver jewellery with gems will breathe history into you. Silver cufflinks with a garnet in the Renaissance style, faceting machine lapel pins, a medieval ring or a silver Dumbledore wizard ring. If you are interested in something unusual, something that sets you apart from the crowd, be sure to check out Justin K Prim’s work.

‘A good piece of rough material is exciting because it’s up to the gem cutter to use their imagination to find out what a gem can become. There are better and worse choices for the stone’s colour and weight, but they are all creative expressions with a unique cooperation with nature.’ (Justin K Prim)

Gems are what fascinates Justin and what he devotes all his time to, so they are obviously part of his offer. You will find sapphires, rubies, opals, garnets, tourmalines and countless other gems in various sizes, shapes, colours and each one with a unique lustre and brilliance.

More recently, Justin K Prim prefers spinel. These gems have different colours, sizes, great lustre and colour. If spinel is one of your favourite gems regarding these properties, you can look for some at JK Prim’s. But spinel is not the only gemstone that is popular with this gem cutter.

‘In recent years, I have also respected emeralds. I was never very interested in emeralds until I started cutting them. As soon as I had a deeper experience with them, I fell in love.’ (Justin K Prim)

Whether you prefer spinel or green emeralds or you can’t resist red ruby, colourful sapphires, topazes or aquamarines with a touch of blue, you will definitely choose something at Justin K Prim’s. Perfectly cut, exceptional, unique gems in diverse colours and shapes can be part of your jewellery. All you need is to know what gemstone is best for you. 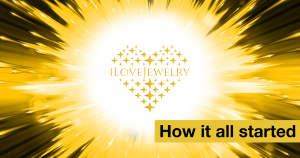 How I got in contact with jewelry and started I Love Jewelry   Writing this article is very difficult for me. Even 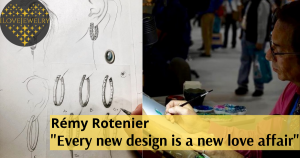 Rémy Rotenier – jewellery designer and artist ‘When my mum’s diamond ring caught the sun and sent gleams to the wall, all 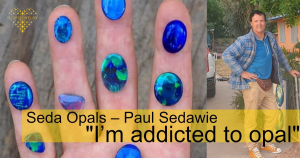 Seda Opals – Paul Sedawie ‘I’m addicted to opal, so I go to all the opal deposits in Australia, trade with all 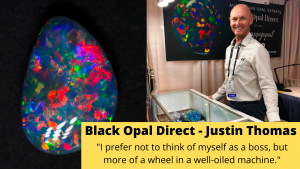 ‘I’m a coffee snob, therefore I only buy the best beans. I even roast my own beans. I saved and bought an 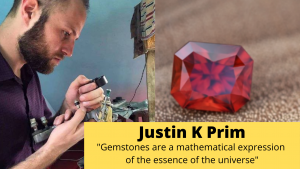